I was looking for a unidirectional “shotgun”-type condenser microphone for use with smartphones to shoot videos of objects far away in “External Microphones for Use with Android Devices” (and eventually ended up buying a MIC-07 shotgun mic. While I was at it, I bought a Boya BY-A100 omnidirectional condenser microphone on eBay for ~$19, or a little over 2,000 yen. Clearly, this was for an entirely different purpose.

Once I shot an interview video with a smartphone without any external mic, the interviewee’s voice was recorded at such a low volume that when you watch the video, you have to crank the volume all the way up to be able to hear what he was saying. So I knew I needed an external microphone for possible similar situations in the future.

To shoot an-interview-and-an-interviewee videos, probably a stereo mic would have been better, but as I wrote in the article above, it is generally not easy to record audio in stereo using a smartphone with an external mic, so basically I just settled. 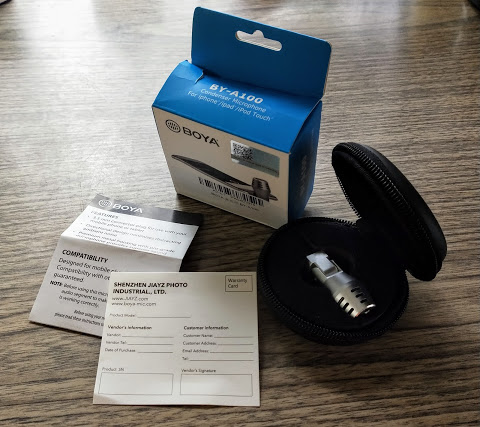 The package for Boya BY-A100

BY-A100 is obviously a discontinued product, but I managed to find its PDF manual, but there is not much useful info there.

I thought BY-A100 would be easy to use because all you have to do is to plug it into the 3.5mm headset port of a smartphone (and possibly use third-party auido/video recording apps that support external mics if the built-in ones do not, just as I did in “Oppo R17 Neo Supports Audio Recording in Stereo.”) Since such usage is assumed, I was certain that it had a TRRS plug (which was obvious from the photos too), and I would not need a TRS-to-TRRS converter.

When it arrived, I did a very basic testing with an old smartphone (Xperia UL) and there was a noticeable improvement in sound volume (listen to the recording below). Actually, I realized there was a problem using it with my then main smartphone Oppo R17 Neo, but I will talk about this in a separate article.