Addendum: I should have tried Adebar: Android DEvice Backup And Report, using Bash and ADB, which was promoted by the author himself in “backup – Is it possible to migrate apps and their data from one unrooted Android phone to another? – Android Enthusiasts Stack Exchange.” It is based on the Adb method, but it seems to have many extra features, particularly for rooted devices.

This article is about transferring (or cloning) apps, their settings, and other contents from one Android phone to another. This is what you typically have to do when you switch phones. I am writing this article mainly for a friend in the US I have sent a Xiaomi Redmi 9T to as a gift, after giving it a lot of tweaks (photo album compiled specifically for this friend). I needed this info for myself too, because I was going to switch to my new Redmi Note 10 Pro, which runs Xiaomi.eu ROM (euROM) 12.5.9.

What I wanted to achieve was that not just the apps, but their settings too, are transferred to the new device. Without your own settings, you would have to set up apps one by one all over again, which would be very tedious. Ultimately, I kind of managed to do it, but only with a few apps, with Google’s cloud backup method. With most of the apps, I still had to set them up and am still setting them up from scratch — it is indeed a tedious process. If you know of a better way, do please enlighten me. For my friend, I would recommend the Mi Mover route.

A very important warning: whatever method you may use, you will have to take specific actions separately to preserve the chat histories of your chat apps, e.g., Whatsapp. Otherwise, your chat histories will be gone forever.

Using the automatic backup provided by Google, as explained in “How to Transfer Apps to a New Android Device,” is one easy way. The problem with this is that your only chance to do it is either when set up your brand-new device for the first time, or right after you factory-reset your device. My American friend thus cannot use this method, because doing it would mean she would have to wipe off all the tweaks I gave to her Redmi 9T.

I tried this method myself, though. Despite my expectations, with most of the apps, I had to set up apps from scratch, although there were a few exceptions. And the apps you did not install from Play Store were not carried over at all. And media files, e.g., images and videos, were not transferred at all.

There is an equivalent way to do the above by yourself, using a PC. The PC has to have a utility command called Adb (Android Device Bridge) for accessing Android devices connected to that PC.

“How to fully backup and restore your Android device without root – 9to5Google” describes the process. To have Adb, I suggest using Minimal ADB and Fastboot Tool, as opposed to the full Android SDK.

Actually, I did not know this method. I gave this method a try too, but I observed the same problems with using Google’s cloud backup.

Some argue that ‘adb backup’ is a security hole in that it gives one, who could have a malicious intent, a way to extract app data from your device. Android 12 is expected to restrict the power of ‘adb backup.’ But Google is going to provide another method specific to device-to-device app/data transfer.

Xiaomi provides Mi Mover app for its smartphone users. I tried it twice — once with the version pre-installed in euROM, and once with what’s currently available on Play Store. I honestly do not know if they could transfer app settings too. I also could not tell which version produced better results.

There are two advantages to this option:

Version 3.6.7 that Comes Pre-Installed on euROM

After you download the APK file on your old phone, open it by tapping on it in the list of downloaded files in your browser. You can also find it in file management apps suck as Files, and tap on it there. Your installer should start and install the app. You may need to give permission to install apps from your browser or the file management app.

The data transfer is done over direct wifi connection. Your either phone may say, “I’m not connected to the Internet. Let me switch to mobile data connection.” or something to that effect. Do not let it. If you do, the connection gets severed.

I was vaguely hoping that since the app on the receiving end had come pre-installed, it would be able to restore app settings too, but I could not confirm that was the case. 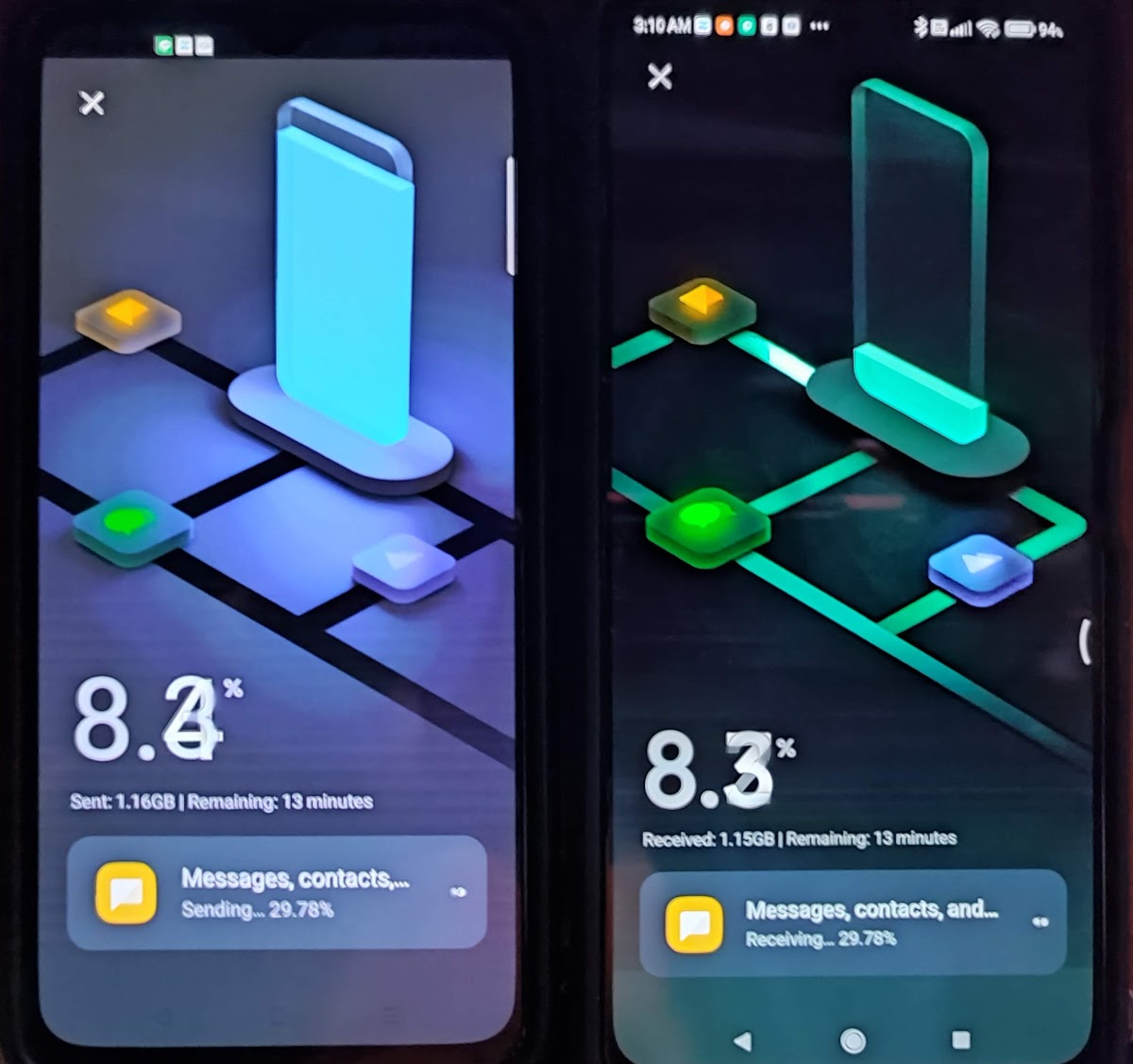 Transferring data from an old Android phone to a new Xiaomi phone using Mi Mover 3.6.7 on both ends

When I try to install the downloaded APK file, it gets denied. But you can just install the Mi Mover app on your new phone too from Play Store and it installs just fine. 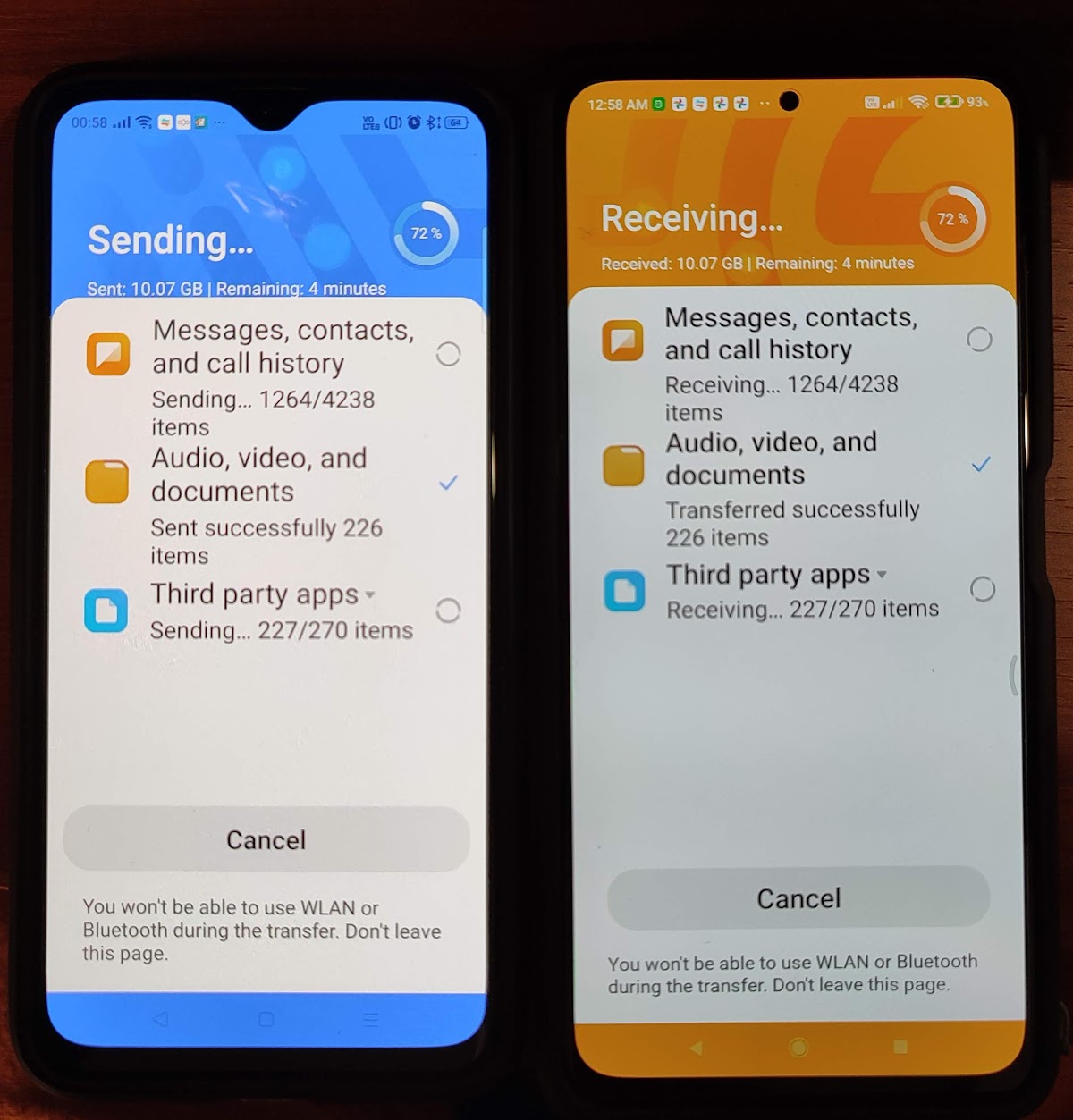 Transferring data from an old Android phone to a new Xiaomi phone using Mi Mover 3.2.2 on both ends

Mobile-centric chat apps, e.g., Whatsapp, requires that you take some actions before you transfer your account and data, and afterwards too, to transfer your account to a new phone. If you mess it up, you usually end up losing your chat history. The followings are there for your reference.